OR
Callie Saves the City of Dallas
Kitties, as you know, one of Sassy and my counselor’s requirements was that I share one of my adventures with Sassy.  So on this adventure old lardbutt, hmm – I mean Sassy came with me.
Callie’s Version

So there I was, reading the Wall Street Journal, checking on my stock, when suddenly I received an urgent call from the Chief of Police for the City of Dallas.  There was a 5023 (catnapping in progress) and he was desperately needed my assistance.  I grabbed Sassy and jumped into my helicopter.  Of course I was the pilot.  I flew at maximum speed, swooping over and between buildings, arriving in record time.  The Chief of Police immediately rushed over to give me the details. A crazed suicidal dog had catnapped the beautiful Miss Kitty.  He was threatening, if his demands – one large bone, heated doghouse and a willing easy poodle – not met, Miss Kitty was doomed.
After quickly assessing the situation, I realized I first needed to calm the frenzied mad dog down.  So I grabbed the bullhorn and started singing “Amazing Grace (How Sweet The Meow)”.  By the time I finished, there was not a dry eye in the house.  The crazed dog walked out and stated that he was so moved by my song that he wanted to not only confess to this crime but another he had committed.  Even some of the police officers said that they were going to take early retirement and teach singing to jail inmates.  Miss Kitty came out to thank me personally and said she was going to name her first kitten after me.
Hopefully, sharing this moving experience with Sassy will bring us closer!
Sassy’s Version 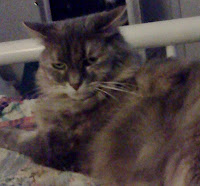 We were sitting around idly licking our fur when we heard about a catnapping over the police scanner.  Now, the police have asked Callie to stay away before, but since this was only a few blocks over, she insisted on walking over to the scene of the crime.
I am not sure the police even noticed we were there, until Callie opened her mouth and started screeching.  It was horrible!  Grown men started crying.  The catnapping dog immediately rushed out and said that if the police would stop that noise he would not only confess to this crime, but would confess to any other crime the police had open.  Several of the police officers were talking about having to take early retirement due to the trauma.  Miss Kitty came out and told me the pain of that noise was so bad that she may never be able to have kittens.
OMC – I just realized she going to be singing again tomorrow, isn’t she!
Posted by Callie (a.k.a. Trouble) at 4:34 PM

Well, I am pretty sure one ofnthose version is somewhat accurate!

Haha! We bet what really happened was something closer to the middle!!

Uh,oh, Sassy. I think we should leave town and meet for a niptini somewhere. Quiet.

Yes, but did any smacky paws happen?

Oh my goodness, what an adventure! I wonder what they think of the other's version of the story...

We're wondering if the adventure precluded any further smacky paw? If it did, then *SUCCESS*.

What we wanna know is: Did that doggy get the easy Poodle?

Ha ha ha ha ha! We like Callie's version, but we believe Sassy's.

Haha! We think Sassy's version may be more accurate.

Hey! Yous guys should joint the FBI! Kozmo would loves to make yous some badges! Then yous could be OFFICIAL!!!
Kisses
Nellie
email penelope dot catfromhell at gmail dot com