Kitties, Sassy here.  I have an update on Nellie’s and my legal situation in Hollywood.  As you will remember, we were arrested after Nellie went Ninja cat on a cop. 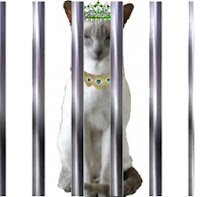 Luckily, Catman, a.k.a. King Spitty was able to break us out.  After sunning herself out by the pool, and having a few Nipitinis to calm down, Nellie went to visit her friend Cody.  I stayed out by the pool.  Soon a nice older mancat came up and asked why I looked so upset.  When I told him about what happened and about my fear of being re-arrested, he laughed and said not to worry, he could take care of it with one swipe of his paw.
Well, I heard from him today and it is all taken care of!  As it turns out, his human was the Director of Information Services for LA Correctional System.  All he had to do was wait until his human left the computer on and presto! all records of our arrest have been wiped.
BTW, when I talked to him last night he mentioned that the policeman Nellie went Ninja on is not doing well.  It seems that he has been put on administrative leave.  He has been seen running up and down the hallways meowing at the top of his voice.  He has told people he has a sister with curly fur and asked people to start calling him Yahama, Honda or some motorcycle name……
Nellie – I think you played too hard with the policeman and broke him.
Posted by Callie (a.k.a. Trouble) at 6:12 AM

What are you doing chatting up strange men - you could end up on Miami Vice!
Luv Hannah and Lucy xx xx

That's so funny... Maybe the policeman is suffering from cat scratch fever?

Well I sure am glad all is well, but I know you could handle it!

Well I sure am glad all is well, but I know you could handle it!

You've certainly been living life on the edge!!!
"Wanted" in oh so many ways!
; ) Katie

Los Angeles will never be the same after this!

You two sure lucked out...we hope that policeman doesn't want to press charges against Nellie.

Hmm, Me thinks that Harley has forgived me. But has yous for abandoning yous Sassy?
Kisses
Nellie

You are a couple of wild kitties! We think we would have a heart attack if all that happened to us. Or at least a nap.

I think Harley is just sad because he has been wanting to use his handcuffs for so long! He's going to do some community service to make up for being such a bad police officer.