Kitties – today I am musing about human TV.  Now, TV is not a complete waste, I mean there is the Meow Mix commercials and Jackson Galaxy’s “My Cat From Hell” (every notice how the cat’s misbehavior is ALWAYS the human’s fault?), but frankly, I don’t understand most of the choices my human makes in TV watching.  For example: 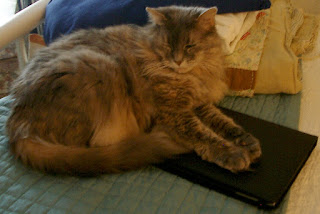 1.       My human likes to watch a certain daytime soap opera.  But this does not make sense to me.  This show goes on and on about a woman who has been married to two brothers and is now sleeping with the father, but there is absolutely no mention of the family cat.  I mean what about the question of who is the father of this kitten?  And why was the new cat (who has a very shady past)  to this family last seen going under the bed with the family dog? What is her agenda?


2.      My Mommie also likes to watch some reality shows, like Big Brother.  Now let’s see, the premise for Big Brother is a bunch of people get locked into a strange place together, they must then fight for survival, until eventually they get out.  HELLO??!!  They call this a original show?  When my Mommie goes on vacation, I get taken to a strange place, locked forcibly in, where I have to fight to survive until my Mommie finally picks me up.  Hey, I play Big Brother a couple of times a year!


3.      Finally, my Mommie also sometimes watch the Dr. Phil Show.  She says she likes to watch this show because it is good to know that someone is more screwed up than she is!  When she says this, I just lick my paw and act like I agree…..but really no, really there isn’t!


Are there any special shows that your human watch?
Posted by Callie (a.k.a. Trouble) at 9:18 AM

This was the funniest and true post today *MOL*

Sassy, Austin sends a kiss and a smoochy hug and says that his human is a dead beat dead loss because she likes to watch costume dramas and stupid quiz shows, oh and also American detective series!! Can you credit?? xox

Yes, humans are strange fur sure! Our humans do like to watch Hawaii-50.

Mum doesn't watch reality shows so we don't know about that but she does love travel shows - we don't it gives her ideas! We don't understand soap operas either as the actors don't sing while they are in the bath
Luv Hannah and Lucy xx xx

Our Mommy watches Ru Paul's Drag Race! We're not sure what that says about her.

My human spends almost no time in front of the TV! For years she did not have one at all. Then her boyfriend moved in and he had one. Then he had a fight with the cable company and there was no TV watching here for a few more years. Now it's back (well, not the cable, but a dish), and if she has the time, my human watches Silent Sundays on TCM (she is a vintage film semi-expert), and Modern Family. Except she usually forgets to watch Modern Family on the TV and winds up watching it on the laptop the next day.

My Mommeh likes to watch reality shows like Top Chef, Project Runway and even the Real Housewives!

my mommy watches the noos. that's about it. her boring and dull.

My Mom is really weird in her viewing habits in watching Anime. She says that these shows are much different than westerns cartoons with some adult material. If it was up to me we would want singing and dancing shows all the time now those are mesmerizing.

Sassy, our mom and dad-guy watch this stoopid show called Storage Wars. Just a bunch of stoopid humans buying a bunch of stoopid junk. Now the show that they watch that we like is one called Diners, Drive-Ins and Dives. We like this one because they show lots of good foods. We just wish we could eat the foods.

Mostly Glogirly watches stuff I don't care about. Her favorite show is Dexter, but it doesn't start for a few months. She won't admit it, but she also watches sappy movies on the Lifetime Channel.

But Gloman likes nature shows, so we watch together! We watched Winged Migration tonight. SUPER cool!

My Human mostly waits for the DVDs because she gets soooo irritated at the commercials (which are sometimes the only good parts as far as I am concerned). She loves FRINGE and DOWNTON ABBEY and TRUE BLOOD (none of those shows have a kitteh--Fringe has Gene the Cow, Downton Abbey has that perky, annoying labrador, and True Blood has some were-animals which are kinda cool).

Oh, we totally unnerstand! We cannot figure out WHY Papa insists on watching FOOD TV! I mean, really - it's not even Smelly-vision! Talk about one big TEASE!

Mommy watches Chopped and Iron Chef with him, and then he does the news stuff mostly. She avoids that. She looooves to read, (S-F mostly) and misses decent S-F programming. Though she thinks the Mentalist is pretty funny.

hmmmm...actually.. I watch with Mom and Dad...no, seriously, I do..I like the news...especially Good Morning America. And even more so, GMA weekend with Dan Harris..he totally luvluvluvs cats! woot woot!

And my peeps watch such a mixture..but me and my Dad totally luvluvluv slapstick...like the 3 Stooges!!! I crack up just watching him crack up...