Can This Relationship Be Saved: Callie's Side

Kitties, lately Sassy and Callie have not been getting along well.  They have been sent to a relationship counselor.  In effort to help all of the brofurs and sisfurs out there get along, their session is being reported here.  Today’s session is Callie’s side of the story. 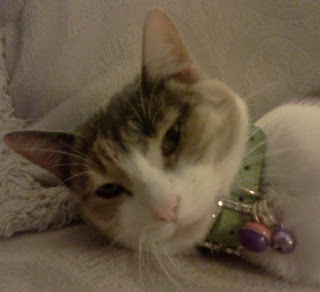 Hello, I am Callie.  I am a beautiful one and half year old dilute calico.  My story starts at the Dallas SPCA, as I really do not remember an earlier time.  Picture it, December 2010.  I was three months old, but still a tiny baby, only two pounds.  There were about a bazillion other kitties at the shelter.  When people would come into the shelter looking for their forever kitten, I was so small; no one ever paid any attention to me.  That is when I realized I would have to make myself stand out.  I started intensive voice training, obtained my doctorate, became a worldwide fashion model and started consulting for the FBI (Feline Bureau of Investigations).  It was a very busy week.  My chance to break out of the joint came when my soon-to-be forever Mommie walked in.  I waded my way through the bazillion cats around her and to get her attention, gave her ankle my best karate chop – you know the one that I won the Olympics with.  I also sang a few bars of my newest worldwide hit single.  It worked!  She picked me up and didn’t let go of me until the adoption papers were signed.
On the way home, Mommie told me all about my new sisfur, Sassy.  I was looking forward to meeting her.  Maybe I would even let her cut a bestselling duet with me.  When I first saw Sassy, I graced her with my sweetest meow.  Imagine my shock when she slapped me across the jaw so hard I saw stars!  I was crushed.  This was the sweet sisfur my Mommie told me about?
Due to my past experience as a hostage negotiator with the police, I knew immediately I had a problem. Sassy would not speak to me except to say that’s my bed, my Mommie, my mousie, yada, yada. I soon realized that to get Sassy to love me, I had to get her attention the way I had gotten Mommie’s attention at the shelter.  I tried singing to her – she said I was making her ears bleed.  I tried showing her some of my gold medal winning karate moves (and yeah, maybe a few of them “accidently” hit her) – she hissed at me.  I tried to give her some of the diet and fur styling tips I learned in Paris when I was modeling – she snarled that she was big boned, not fat and gave me the smacky paw.  Yes, I know that I should have just given up that first week, but to be honest, I soon discovered that annoying Sassy is fun.  A lot of fun! Trying to egg her on just to the point of smacky paw is almost as much of a rush as skydiving.
Sassy whines to Mommie that I am starting false rumors about her.  That is not true.  Sure, when she was recently dehydrated, I may have told a few hundred cats that she had a drinking problem.  Can I help it if they assumed that meant that she drank TOO much, not enough?  She whines that I am stealing her Mommie’s lap.  You haven’t met my Mommie, but trust me when I say that lap is more than big enough for two cats!
I want the loving sisfur my Mommie promised me.  One that I can go on adventures with and that will sing along with me.  Sassy is just too serious and responsible.  She keeps pushing me into the laundry room and trying to make me stay there.  That will not do at all.  The laundry does not have any windows.  How will my adoring public stay in touch with me back there?
Stay tuned tomorrow to hear the counselor's recommendations for this relationship.
Posted by Callie (a.k.a. Trouble) at 5:44 PM

wanted to say hi!!
we are following your blog now too.

Callie, I can tell that you and Sassy definitely have some issues!

Wow! Your point of view is as convincing as Sassy's! Me would not be able to deceide. So me won't me would just locks yous in a room together until yous sorted it out! But if my Mommy tired to does that with me and Kozmo, me thinks she would get the smacky paw!
Kisses
Nellie
PS Kozmo and me sends yous Valentines Wishes!

Oh Callie, you are so entertaining! I hope the counselor is able to help..

Happy Valentines day to all of you!

I sure hope the councelor can help work things out! Happy Valentine's Day!

I just read both sides of the story! And I am mostly glad that I am NOT the therapist in charge. I don't think there's enough salmon in the world. ; )
Happy Valentines Day!
love,
Katie

We're hoping the counselor can help you work it all out! Happy Valentine's Day! :)

Wow. Yesterday I was all convinced Sassy was the wronged party, but now today you are pretty persuasive too. Plus, you have those great songs!

I can't wait for tomorrow! (If you get a divorce, one of you could come over here).

Hmmmm...this is a tough one...we can't wait to see what the counselor says and recommends!