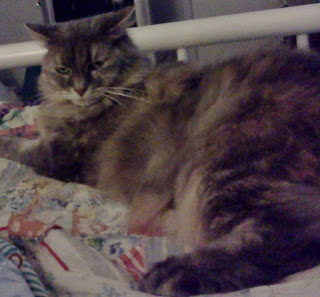 Kitties - Today's musing is about stupid human grooming habits.  Namely the ones she forces on me!  Doesn't she know that I am a self-grooming animal?  Today apparently she was on a roll.  She did the following things to poor me:

Trim my fierce claws:  kitties, it was a terrible ordeal.  There I was peacefully laying on the couch dozing and dreaming about a certain mancat, when suddenly I was grabbed.  One human held me and the other grabbed at my paw and trimmed away my beautiful, long nails.  Doesn't she know how often I had to sharpen those beauties on the couch arm to get them so long?

Brush my long silky furs:  Next, as I sat innocently in the middle of the living room floor, she pounces on me with a furminator.  Soon there was a pile of my special furs next to me.  She says she is doing this so than I will not get hairballs, I say she is collecting them to make something to cover her ugly while, bare skin.

Cut off my pantaloon hair:  the final humilation for today was she trimmed my extra fluffy pantaloon furs.  She says that "we" must keep the furs "back there" short so that I do not carry around any "visitors" from the litter box.  I think that she is just jealous of my lovely pantaloons.   If she was really worried about this, she would let me use toilet paper for this problem!

What tortures does your human put you through?
Posted by Callie (a.k.a. Trouble) at 6:37 PM

Oh, the indignity! The nerve! Especially the pantaloon trimming.

Don't tell anyone, but Boodie and I actually LIKE pawdicures! Binga hates 'em with a passion, so I guess that evens things out.

First, high paws to Callie for her comment to me.
While my peeps can't trim my claws or they'd be in the ER, I love when Pop FURminates me. It's the only time I purr. In fact he owes me a FURmination. CUTS YOUR FUR! And you don't call the animal cruety people.

It sounds like you experienced a terrible ordeal this afternoon. But think of it this way... it took TWO of them to trim the claws of ONE darling little kitty. It isn't fair, I know, but take pride in the fact that your reputation warranted the doubling up of the peeps! May the purrs be with you.

Callie, you are looking mighty bent out of shape in that photo. And, I can't say that I blame you.
All those things done on the same day! Oh, the humanity (or, lack thereof).

'Specially the trouser trimming. Doesn't she know how to use a warm washcloth?

It does sound quite awful. *tsk, tsk* The price of beauty! HaHaMeow!

My Darling! I had clippy-claws when I was at the v-e-t for....well, you know. There is NO WAY the Human could accomplish this on her own. I do not mind the brushies or the Furminator. In fact, I LOVES them. But I agree, the Human would look better if she glued some of my furs on all that nekkid skin. I have not yet had pantaloon difficulties but I will keep the possibility in mind and develop a strategy.

BTW, Callie has asked to be Queen of Texas. I am inclined to think she is not quite MATURE enough for such responsibilities. What do you think?

Goodness! All in one day?? Poor darling! Be careful of the furminator-ed furs.. she might be planning to knit a new kitty! and you KNOW what happened last time that happened!

Have a more easy week!

My human has her ways of torture... from using the flashy box on me when I'm taking a nap to setting up mouse traps with out giving me a fair chance to catch the mice.. to dressing me up in 'cute' clothing against my will! **sigh**

Sassy, girlfriend, I feel for you. I had my beautiful pantaloonies trimmed at the evil v-e-t. And it was not pleasant experience.

Hmmm, well, Sassy, I will take all this under advisement. But I have to say: I have had royalty applications from Southern California, Texas, Tennessee, Maryland and "The MidWest". In consultation with Punapippuri, King Kitty Cat of Finland (North), King Mr. Black and I will reach a decision about how further coronations should be organized. After all, the Royal Family has its standards. And you're sure YOU wouldn't like to be a Royal YOURSELF, Sassy???

Being short haied cats we don't have to go through much grooming torture. But sometimes the mum likes to hold us like babies nad kiss us. We DO NOT like that, at all.