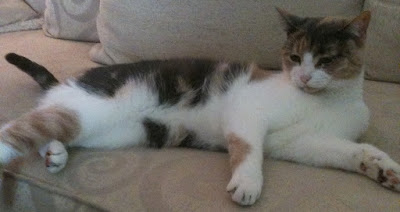 Kitties - Callie here.  Well, Mommie finally decided to wander home and rescue me from my dank, dark rat-infested (and not in a good way!) prison.  (Mommie:  actually both of the kitties were in a very nice sunlight filled quiet cat room.)  Well, yeah, but it was not arranged according to Feng Shui principles so I suffered!

Yeah, she did call once to check on me, but I was too busy fighting off a prison gang of rogue dogs.  They have me backed into a check and was threating to give me a "Dawgs Rule" tatoo.  Only by bravely facing them down did I walk away without a tat. (Mommie:  actually, when I called, she was sleeping in her private cage, on a soft cat bed....)  Okay, I was sleeping, but the bed was not ergomonically supported, so I suffered!

I had to sleep with one eye open, as the people kept coming by poking me through the bars.  (Mommie:  First of all, her cage did not have "bars" and secondly, the only thing they gave her was extra treats and spoiling...)  But, they were not range free chicken treats....so I suffered!

Finally, the name of this place really confused me.  It was called Pappy's Pet Lodge.  But my birth Mommie told me all about my father.  He was the crown prince-cat of Alquiqonia.  He had to tragically leave my birth mother shortly after they met because evil terrorists were threatening his kingdom.   So obviously, this was not Pappy's Pet Lodge, I mean what would the crown prince-cat of Alquiqonia be doing running a pet boarding place in Texas?  (Mommie:  yeah, Callie, about the story that your birth mom told you about your papa.  Now that you are older, we should talk...)  What, have you heard from my Papa, is he coming to visit??

And what did the Mommie bring me back from San Antonio?  Nothing!  Yes, you read that right!  The cheapskate....

We think that Callie really suffered!

Ok, maybe you didnt really, seriously suffer while your mom was gone.. but not bringing you anything?? the horror!!
Did Sassy get anything?

Callie, you were abandoned in substandard housing? And your human brought home NOTHING for you? Punishment must be meted out!

Callie, we hafta say that you definitely had it worse than us. Our mom went away, but at least we got to stay in our home. But we got nothing either! So unfair!!!

Oh Sweet Pea!
I am so happy that you have survived your incarceration in the POW camp!
Kisses
Kozmo

You poor dear. At least your home, back where you belong, among your luffed ones. (we use that term loosely - mol!)

That sounds HORRIBLE. I think you need to run away and come here!

Oh my goodness, you got nothing after all of that?

*Thank you* for our human's much-needed laugh this Tuesday morning!

Oh Callie! There has to be an upside to this? Perhaps you can write a warts and all bestseller about the truly horrendous time you had! On the other paw, maybe Pappy would sue for defamation or something!!

Hhahahaha ;) you are funny xx

Oh dear. Our hearts are with you and we send you catnip to cheer you up xxoo

And where's my Darling Sassy??? Was she cruelly left behind to snuggle in the soft beddy and eat all those extra treats?

Thank you very much for the information provided! I was looking for this data for a long time, but I was not able to find the trusted source.
Kızlık zarı

Haha, this post is so funny. Thank you for making me laugh. Happy Wednesday to you!!!!