Kitties, I sitting here musing about desserts.  Humans eat these after their meal.  Sort of a delayed treat.  My Mommie is absolutely obsessed (or is that obese!) about desserts.  She plans her meals around them; dreams about them; and looks at the dessert section of the menu first.  But I do not understand these desserts things.  Obviously, this is yet another way that cats are superior to humans.  You will understand this statement when I explain about the selections. 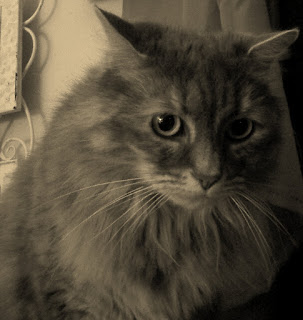 1.      Pies – these are round things with a bread crust usually filled with fruit.  Mommie’s favorite is cherry, with is a small, red, round, sour thing.  Really?  Bread and sour fruit? If a cat ordered a pie it would be Sardines with a Cat Nip crust.


2.      Cake – these are also round things, usually two layers covered with an overly sweet sauce.  Mommie’s favorite is Red Velvet Cake – which ironically enough has nothing to do with the color red or velvet!  Now, if cats ate cakes we would have a Shrimp Cake with chicken broth icing.


3.      Cookies – Again round things (what is this thing with round stuff?) sometimes with an icing inside.  Mommie’s favorite is chocolate chip.  Now a kitty cookie would be Silvervine flavored with tuna chunks.


4.      Candy – Okay, I can’t even go there – Mommie’s favorite is Snickers.  That’s right – she eats something that sounds just like the things she wears on her stinky feet all day!  Humans!


What desserts would you improve upon?
Posted by Callie (a.k.a. Trouble) at 5:23 PM

Dessert is in short supply around here, but I'm all about fishy flakes. For dessert or any time!

Dear Sassy
I think you are absolutely right. But there is one thing about cake and pies I like Cream! Whipped or Ice YUM!!!!
My Sweet Pea left me a message on my bleated Man Cat Monday post (the scheduler did not post it at midnight like it was supposed to).
Callie! I would LOVE to sing a duet with you on Friday! Can we do it at your place? We are taking Bob to Spokane for her operation and we will be staying in our trailer (I've never stayed in it before). We won't have internet access, but Queen Penelope tells me there is a Feline transporter in the shower! So I can come there!
Kisses to both of you gorgeous ladies and extra kisses to my Sweet Pea!
Your Sweet Ba Boo

I think I would like a nice Cream Puff if it had cream inside and the puff part was a bit fluffy toona. And I think fudge sounds good if it is made from liver.

You know what is a REALLY good dessert? Whipped cream without all that yukky sugar humans add to it! In fact, that is what I will be having at my birthday party on Sunday!

Kitties are way smarter than humans. We would eat dessert *first* and then the other stuff if there was any room left.

We think jelly roll would be good if the jelly part was mousies and the cake part was nip flavor.

PS: My woman wanted to say how beautiful you are, Sassy, in today's and yesterday's photos.

Golly! I like sweets! But I think chikkun ice cream would be pretty good, too.
~The Baby

We think we would like to try salmon samosas and creamed cod.
Luv Hannah and Lucy xx xx

I don't know what I would improve, but I sure am hungry now!

Well Austin is always going on about me getting my "just desserts" !!!

My Mommeh always has to have something sweet after dinner! But she just has crappy stuff like little pudding cups or packaged cupcakes or something.

FaRADaY: We totally wanted to make a birfday cake for our mommy last month and asked Dad to help... AND DID YOU KNOW *gasp!* We were TOTALLY out of mousie sprinkles?!?!? Canz you beleeeeve it????

What kitchen is without mousie sprinkles???

And Daddy absolutely refused to look up salmon truffles on the internetz for a topping too. *shakes head* what is this wirld coming to?

We would add Cool Whip to it... That's our favorite human dessert. All of that talk made us hungry.