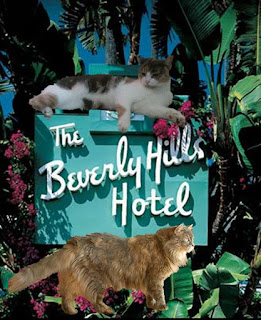 Kitties, Sassy here.  I am so excited,  I am writing this from the Beverly Hills Hotel!  Callie and I are here in Hollywood to attend the Real Housecats 2 premiere.  We came early so that Callie and Kozmo could spend some time together.  We are getting to spend several days in Hollywood, attend a premiere and all she can talk about is “Kozmo is going to look so handsome on the red carpet, Kozmo is so….blah, blah, blah”.  I am excited because Kozmo is bringing Nellie with him.  I so admire Nellie – she really knows how to keep Kozmo in line.  I hope she can teach me how to train the  Spotted Airhair (otherwise known as Callie) . 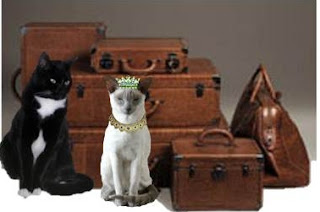 We had only been here a few hours when there was a knock on the door.  It was Nellie with Kozmo, who was carrying all of the luggage.  Nellie immediately told Kozmo to go put the luggage up.  When Kozmo complained and said he wanted to see Callie, Nellie let out a weak meow and staggered over to the couch.  She said she would do it, but she was still feeling weak from her near death illness earlier last week.  Callie decided to go with Kozmo to put the luggage up.  As soon as they left, Nellie immediately jumped up and asked if I was ready to see how Hollywood was HER town.  When I asked if she wasn’t sure she should lay down to rest, she laughed and said she felt fine, she just wanted to get Kozmo to handle the luggage!
Stay tuned tomorrow to get these and other burning questions answered:

*  Can Hollywood survive a visit from Queen Penelope?
*  Can Nellie teach Sassy how to properly flirt?
*  What happens when Nellie loses her temper?

Go to Kozmo's blog to follow Callie's and his adventure in Hollywood and prepare for the upcoming exciting premiere of Real Housecats 2!

Oh my goodness, you all are going to have such a fun time!

Haha! That Nellie is quite the character, isn't she??

All I can say, is I hope that Kozmo can keep all you girls in line. You're quite the handful!!!

The Spotted AirHair! MOL Sassy! We think you'll have a fantastic time with Nellie. She knows where all the bodies are buried.

You ladies are so lucky to have Kozmo to fetch and carry for you this week!!
Luv Hannah and Lucy xx xx

This is going to be GOOD!!!!
...love that luggage!
xo Katie & Glogirly

You girls are going to have a great time. Hollywood is going to wonder what hit them!

Spotted Airhair! OMC that's too funny! I hope you all have a great time and someone keeps the trouble makers in line!