Kitties, while a certain airhead Calico was off riding trains, I was doing some serious thinking.  The subject for this Monday’s Musings is:  Loew’s Hotels. 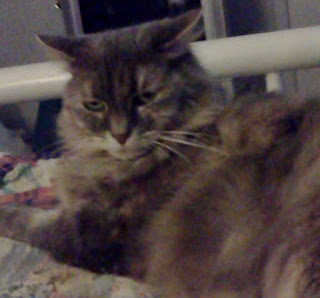 I am sure everyone here has heard about how this supposedly “pet friendly” hotel is cruelly and inhumanely trapping their TNR colony and sending them off to a kill shelter, in spite of repeated offers of help from various agencies.  The reasons they have given for doing this horrible thing have been weak and unconvincing.
All of this has gotten me to thinking – if this is the logic they use for the cats – would they use the same logic for guests?
Here are some examples:
1.      Loews claim that they must remove the TNR colony because they may cause the spread of disease, even though the cats have all received their rabies shots.  So…using this logic, if a guest was to sneeze in the lobby while checking in, would Loews immediately stuff the guest into an undersized cage and sit them out in the sun with food or water – because you know, by sneezing, the guest could spread a cold to other guests.

2.      Loews says that they must remove the colony because the presence of these cats might encourage other cats onto the property – even though all cats in the colony have been fixed.  So….using this logic, if a guest, while staying at the hotel, was to ask a friend to meet them at the hotel, would Loews, upon seeing this, immediately cage the guest and send them to a kill shelter, because you know, the hotel does not like guests to have anyone over.
3.      When Loews started this colony, they made a commitment to the cats.  But now that they have decided that commitment is inconvenient, they have no problem in not honoring it.  So…using that logic, if a guest stayed at this hotel, but at the end of their stay the guest decided that it was inconvenient to pay the bill, can the guest just not pay?

Unfortunately, several of the cats have been captured and it seems that nothing is going to dissuade Loews from this horrible decision.  It would appear that they have won.  But here is the thing – by choosing to fight this battle, the executives at Loews who made this horrible thing happen have guaranteed that they will soon have themselves a personal one-on-one meeting with KARMA.  And you know that is one nasty b*tch.  She does not fight fair.  I'll try not to enjoy the show TOO much!
Posted by Callie (a.k.a. Trouble) at 6:09 PM

Sassy, we like the way you think! What Loews is doing is just so inhumane! But you're right, Sassy, we don't think they can be persuaded to change their minds. We hope that the decision they have made comes back to bite them in the a**!

We are waiting for the Karma wheel to grind Loews, slow and finely.

Loews stinks! Since so many of the cats have been trapped, more people have seen rats running around there. Plus the "vacuum effect" has already taken over and a couple of the most recent captures were UN-neutered cats that were not part of the colony, looking for new digs. I hate those hotels and I wish bad things on them. The only thing that would make me happy would be if they 1) canned the cat hater in management - Bartek or whatever his name is - who ordered the cats trapped, and 2) the colony returned to the home they so clearly miss.

Oh yeah, and BTW, these cats NEVER hurt anybody - can't say that for the animals that actually stayed as guests at the hotel - in January, one guest's DOG killed the dog of another guest!

Sassy, you got it so very right! We're giving you a standing ovation!

We have developed a strong dislike for anything Loews. We have told them and will continue to tell others. The Loews humans should all be spayed and neutered. Humans that evil should not be allowed to reproduce.

yeah - payback on this one could be interesting.... it is just sad that this company can't do the right thing...other do with no problems. sigh......

In addition to Karma biting them in the you-know-what, we are hoping this Public Relations firestorm permanently hurts them. They don't deserve to be in business.

Me agrees with Katie and Glowgirly, what they has done has given them a really big black eye! We has looked up and made sure we (and the peoples that Mommy works with who travels all the time) never stays at any of their hotels in Canada or the US.
Kisses
Nellie

We will nebber, ebber stay at ANYTHING even remotely related to a Loews. And if it is the only hotel in a 100 miles, we'll sleep in our car. We wish dreadful dreadful dark awful things for them.

I agree with all of you. I will never and I hope never have given them a penny of mommy's green papers.

Don't forget http://www.tripadvisor.com/ where you can communicate with people shopping for vacations by posting in the review section.